Yaha grew up in an orphanage along with Urick, whom he loved ever since. Having been one of the main members of the order, Yaha was made a guardian to the District of Precious Light containing the Holy Crystal. He was a friend of Urick, but their relationship quickly ended after Yaha made a pact with the Gnomes. The price was his "luster."

Yaha is one of the five lieutenants of the Knights. He is soft spoken and dripping with sensuality (in his words, "an excess of charm"). His soul is tied to the Holy Crystal of Hallowed Light, key of the District of Precious Light.

True to his name as the guardian of light, Yaha is a master of illusions and deceit. The Citadel of Light, Yaha's castle, is a myriad of illusions and puzzles, including fake walls, inexplicable winds, and magical cooridors. Urick warns the party not to look into Yaha's eyes: "Don't look into his eyes, he'll trick you with his lies... it's the power given to him by the pact-beast. Or maybe it's the price he had to pay..."

During the party's fight with Yaha, he claims that one reason he became a pact partner was to make himself attractive for Urick, seeing him as more than a friend. However, Urick rejected him even then. Yaha continues to try and seduce him, as well as Nowe, in the heat of battle.

He is eventually defeated and the district key is destroyed. After his death, Urick laments that perhaps the two of them would still have been friends had Yaha not rushed into a pact to make a name for himself in the Knights of the Seal.
Spoilers end here.

Dengeki Online conducted a follow up interview series to their character popularity poll with series's producer Takamasa Shiba and series's character designer Kimihiko Fujisaka. Shiba specifically wanted ROLLY to be cast for Yaha. He believes the trendy voice actor and his design have aged well over the years.

Yaha with the Drakengard 2 cast 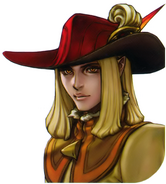 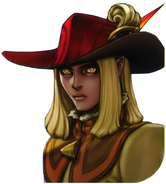 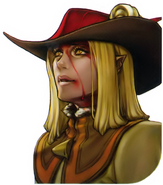 Retrieved from "https://drakengard.fandom.com/wiki/Yaha?oldid=19324"
Community content is available under CC-BY-SA unless otherwise noted.