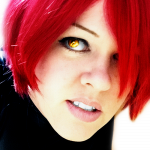 Hi, welcome to Drakengard Wiki! Thanks for your edit to the One page.

I've seen your translations, as I do follow your DOD3 Facebook page, but I wasn't aware that it's confirmed that she isn't the real One. Her behaviour is peculiar, but that might relate somehow to the Flower taking her over or something.

Well, she does seem to have Intoner powers and her little profile in the manga implies that it's her... though those are probably written by an Accord and she's limited by what she has observed up until that point. I really wanna know what happens next, most of the chapter endings are such cliffhangers! ~ Dan's Friend (talk) 16:11, April 26, 2014 (UTC)

Images from Shi ni Itaru Aka

Hey Rekka Alexiel, I was wondering if you'd let me add images from your translated Shi ni Itaru Aka pages? I'm really sorry, but I forgot to ask for your permission to upload images of charaters from your website, and uploaded 5 images of Caim. I remembered to ask when I saw that someone else uploaded your images before asking for your permission. Nier1411 (talk) 19:31, July 15, 2014 (UTC)

Oh, I didn't even realise the Drakengard 1.3 images were yours! Really sorry about that. I just resized the original image to fit Caim's character infobox, I wasn't trying to claim the image is my own or anything, sorry about that as well. Thank you for letting me use your images, since you are the only person on this wiki I know of who has ownership of images from the manga. I've actually already added in the description of each image I've uploaded that I got it from your website and that you are the owner, and I will continue to do so. Again, thank you and sorry. :) - Nier1411 (talk) 02:05, July 16, 2014 (UTC)

Hello there. I've been really loving your translation work for Drakengard 3. I was completely hooked on Shi Ni Itaru Aka, and am looking forward to the finale of Utahime Five. I was wondering how translation work on Drag-On Dragoon 3 Side Story was coming, and generally how you were, as I'm actively interested.

On a side note, if you can, I was wondering if you could find an interview with Taro Yoko conducted with Eir Aoi. I know it sounds farfetched, but that's what I heard. I'm very curious about what Yoko said about the game, or even about the series. Generally, I'm curious about everything Drakengard. Been hooked since... last year. --Crystal Tear (talk) 16:04, November 2, 2014 (UTC)

Hi there, thanks for your message. I know this is a minor nit-pick, but I like to keep the original title of this novel intact, which is called "Story Side" rather than "Side Story". I mostly say this because "side story" implies a minor story outside of the main flow of events, which this is not. It may be a telling of a Branch E storyline, but I think it is still solid enough to stand on its own, if that makes any sense. xD

Actually, I wasn't translating the novel. That's waaaay too much of a task for me, but I had been making some notes and sparse translations of some bits as I was reading through the book. I must admit, I haven't finished with it yet because I wanted to devote more time to reading it and taking notes, something which requires more time. :P I will get back to it sometime, soon I hope. <3

As for the interview with Yoko Taro and Aoi Eir, this was published in the DOD3 Complete Guide and does have some interesting bits in it. It's in the section just before the DOD1.3 novella chapters, so they talk a little bit about that, too. I haven't translated it yet either, but I will try if I have some more time and energy. xP

Thanks for the great comments! I really appreciate it! You did a nice job with the novel page you added. I'll try to help out with it as I finish reading it. <3 Rekka Alexiel (talk) 16:43, November 2, 2014 (UTC)

Hello, it's me again. I've found the oddest thing. Some authentic looking scans from a Japanese magazine (I know not which) showing an..... anime based on Drakengards 1-2 and Nier. This are where I came across the scans. I have no idea whether these are cosha or not (if they are fake, they're bloody good). What do you think? Have you heard anything? I am prepared to have my expectations of blood-soaked anime delight shattered. --Crystal Tear (talk) 21:58, November 9, 2014 (UTC)

This is easily answered. These photos were taken from the World Inside book that came with the 10th Anniversary Box released on December 19, 2013. Although the illustrations, storyboards, douga, and genga drawings give the impression that there will indeed be an anime series, this is just a joke. Yoko Taro even says on the page, "Just kidding." I don't understand why it is so difficult to check the source material before spreading rumors things like this and getting people's hopes up. Rekka Alexiel (talk) 23:16, November 9, 2014 (UTC)

I want to talk to you about three things

Hi, thanks for your message, however, I'm gonna have to disagree with this assessment. Alas, I have not competely finished reading the book, but I believe you're reaching pretty far to come to these conclusions.

First Point: We already know that the DOD3 Story Side novel is the only branch that directly connects with the original DOD1 game, as stated by Yoko Taro himself in his interview with Aoi Eir as they discussed the DOD1.3 novella within the DOD3 Complete Guide.

Second Point: About the creation of the Flower, very little about this is known, but according to the overall DOD Timeline that was published within the DOD 10th Anniversary -World Inside- book, it appears as though the Flower was first summoned or created by a female magician who made a mistake in a complex vocalized magic spell that was actually banned for whatever reason. It is this mishap that causes the Cathedral City to fall to ruin and all of its inhabitants disappear over night. This mishap occurs in 995, exactly two years before Zero is resurrected.

As for the sudden appearance of the City to begin with, it is never explained where—or when—it came from. Given the events in the Utahime Five manga, it is clear that the Lords of the Land have a clear understanding of the City’s origins, which is why they go looking for the Mercurius Gate and attempt to open it to obtain great power. Plus, a character who very much resembles Accord appears as a holographic guardian of an inner temple within the ruins. Both she and Bartas, another mysterious character, apparently speak/understand the same “ancient” language. Although everyone refers to the origins of this city as being very ancient, I argue that it is actually from a distant future that has since been erased or nullified due to multiple timeline erasures/changes. You can also view my own Web site to read more speculations on Accord in relation to YoRHa:

About Brother One, let me remind you that he is never considered to be a “real” Utautai. He is always referred to as a “fake”. Apparently, only the Flower can create true Utautai, and none of the other Utautai girls can create new Utautai. We already know that Manah is of Brother One’s lineage through Rosa.

The manga Shi ni Itaru Aka and the DOD1.3 novella occur on the same timeline. I suggest taking a look at the timeline on my page:

I believe Brother One is dead by the end of Shi ni Itaru Aka, however, it is unclear whether or not any of his magical essence still remains to infect others with the Red-Eye Disease. Since the present time of the DOD3 Story Side novel takes place in 1017, we have no way to know how Brother One’s life might turn out later on. It’s not until probably around 1051 when One attacks the Cult of Watchers and kills Gruen that he meets Nero in the Elven villages. There’s a lot of time in there that could lead to a very different life for One. Maybe he doesn’t even meet Nero in that branch, but we will never know.

Third Point: There is no definitive connection between Rosa and Accord. We cannot make this connection on the sole fact that they might share the same eye color and/or favorite style of earrings. There is nothing in either the overall timeline or the manga that states that One even slightly reminisces about Rosa after their very likely one-night stand. The only reason why One doesn’t go after Rosa and her descendants is because he never knew she was pregnant to begin with. It is through her bloodline that the Red-Eye disease managed to survive even after he dispatches Fey and her only son Luis.

The only reason Accord is “secretive” regarding her origins is because of her job. First of all, she’s an android, so she can only perform within her given programming. She is also a tool of a larger organization that gave her the task to record the events of the past. As a recorder of time, she is not allowed to interfere. In the end, though, we do see her change the longer she spends with Zero. She begins to take on more human emotions and attachments… and eventually willingly interferes in the timeline to help Zero achieve her goal. I see nothing in her story that even remotely resembles Rosa.

So what are your thoughts about the Gods from the first two games? They were apparently known as the nameless before they usurped the Dragons.I think it may have something to do with the Queen-Beast from the first game and The Flower from the third.I think whoever created the flower wanted to become a god or at least create one but it got out of hand and thus the watchers were born.So the Story side is the true ending which is similiar to both B and D right? So does Zero get sealed away?Gamma Venom 567 (talk) 14:50, February 21, 2015 (UTC)

This is the actual definition of the so-called "Gods" from the -World Inside- book that was included in the DOD 10th Anniversary Box:

The one and only absolute Creator of every creature and person. All creatures act based upon the great “will” of God. However, God is unable to control mankind due to “free will” alone. Many people believe that God wants to eliminate humanity because they were “a mistake whose only strength is their ego.” —DOD 10th Anniversary -World Inside-

From this definition it's difficult to say exactly who this entity is or if it is even a true "god". The argument is that if God is an almighty being that created humans, than he can likewise decimate them any time he wishes...and yet he doesn't. This suggests that the entity is not a true god...or that there is some sort of rule that forbids any sort of direct contact with its creations, thus he enlists other beings to carry out his wishes (Mother Angel, dragons, etc.). It is also important to point out that Yoko Taro has said that we have never actually seen this God entity in person thus far, only his servents. Rekka Alexiel (talk) 11:25, April 3, 2015 (UTC)

Retrieved from "https://drakengard.fandom.com/wiki/User_talk:Rekka_Alexiel?oldid=16686"
Community content is available under CC-BY-SA unless otherwise noted.