Urick is a former knight and pact partner of the The Reaper.

Urick grew up in an orphanage along with Yaha. He was once a member of the Knights of the Seal. He trained under General Oror and was quite friendly with Oror's adopted son, Nowe. During an attack on the seal Urick fought alongside General Oror against the One Eyed Man. Urick was defeated, but was saved by Oror. However, Urick quickly fled the scene afterwards as he feared for his life, leaving Oror behind to perish to the One Eyed Man. Urick then made a pact with the Reaper and as a price of the pact he lost his mortality. As time passed, Urick felt extreme guilt for abandoning Oror. Such guilt is what lead him to leave the Knights of the Seal and live a life in secrecy as the Masked Man.

Urick's first appearance was in the Village of Rust, when he saved Nowe and Manah from bounty hunters. Urick joined the duo on their quest to destroy the seals and free the people from the Knights' oppression. Upon leaving the village, the group ran into the One Eyed Man. Unsure if he was able to defeat him or not, Urick suggested that they take their leave while the man was occupied with the Knights.

Urick accompanied Nowe and Manah the District of Precious Light. With his help, the group was able to fight through the waves of knights and bypass Yaha's tricks. Once at the Hallowed Light Dais, the group faced off against Yaha and his pact partners, the Gnomes. Yaha was soon defeated and gave his last goodbyes to Urick, revealing them to have been close during his time as a knight (possibly hinting at a homosexual relationship). With the Crystal of Hallowed Light destroyed and the lieutenant dead, the group continued to the next district.

The group returned to the Village of Rust to search for clues to the whereabouts of the missing lieutenant. They learned from a source that the missing knight resides within the Closed Lands. The group ventured to the valley in order to capture him before he departed. However, it was a trap; they were ambushed by Eris leading an endless wave of knights. The situation was grim until the One Eyed Man appeared and slaughtered the reinforcements. Within the slaughter, Manah is shown to adopt a growing familiar abhorrence of the One Eyed Man, suggesting they both shared some distant history. In this, it is learned that the One Eyed Man is, in fact, Caim. Concerned for Manah's well-being, Urick once again urged to retreat and leave Caim to the knights. When they fled, Eris gave chase and confronted Nowe to reveal Manah's past as the infamous villain who attempted to bring destruction to the world so long ago.

Once Eris was evaded, Manah separated from the group to pursue the seals on her own. However, it was not long before she was captured by Caim. Nowe and Urick found both of them within the Shining Life district, fighting Knights of the Seal. When the two arrived, Caim released Manah so he could challenge Urick. Still unsure if he could best him or not, Urick accepted the challenge, leaving Nowe to search for and rescue Manah from pursuing knights. He ultimately failed and Manah was taken captive.

Though he was wounded during his fight with Caim, Urick wished to assist Nowe in rescuing Manah from the knights. Upon returning to the castle, Urick was amazed at how much the knights had grown in his absence. Combining their strength, Nowe and Urick fought through the waves of knights and managed to reach Gismor's chambers. Once the general was defeated and Manah was saved, they resumed their travels to destroy the seals.

As the party returned to the District of Shining Life they discovered that Caim had already made it to the light chamber. There, it was finally revealed that Urick was the illusive missing lieutenant of the district. Willing to sacrifice himself, Urick offered himself to Caim, yet unwilling to let his friend die, Nowe fought Caim in his stead. However, Caim easily overpowered the younger warrior. At the very last second, Urick jumped before the final blow, receiving a fatal slash to his chest that flung his body upon the center of the chamber. With Urick's death, his pact partner, the Reaper, took over his body and forced Caim over the ledge of the chamber into a black abyss. In his dying words, he expressed that he has atoned for his sins and guilt of abandoning Oror in the past. Nowe then solemnly placed his body in the garden of flowers occupying the center of the chamber, which ignited shortly after.

Urick possesses incredible strength and is highly skilled in the use of scythes and axes. These traits allow him to take down large monsters with ease such as Trolls, Ogres and Minotaurs. He also appears to be immune to magic he is familiar with, as he is seen in game bypassing a room charmed with Yaha's magic while others cannot (this is most likely due to their past relationship with each other, as he states that he is familiar with all of Yaha's tricks).

Dengeki Online conducted a follow up interview series to their character popularity poll with series's producer Takamasa Shiba and series's character designer Kimihiko Fujisaka. Shiba says he's a fan of characters wearing masks and wanted to have one in Drakengard. His general concept was to be a handsome man hidden by a mask; they believe that he's a popular choice for the female fanbase. Fujisaka expressed his confusion for Urick's hairstyle and wonders if he should have altered it.

Urick and the Drakengard 2 cast. 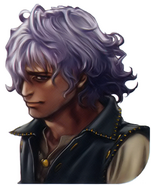 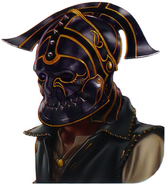 Retrieved from "https://drakengard.fandom.com/wiki/Urick?oldid=18796"
Community content is available under CC-BY-SA unless otherwise noted.