Specters are aerial enemies that make their first appearance in Drakengard. 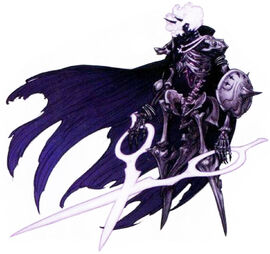 Specters appear as giant skeletal titans that wield weapons ranging from scythes to giant scissors. They attack using magic and will charge their targets.

They make their only appearance in the skies of the Cathedral City.

Specters take on the shape of a grim reaper and carry a scythe in each hand. They can deflect attacks with their scythes and also throw them like boomerang projectiles. When they throw their weapon, they are vulnerable to attacks. When close to there target, they perform a melee attack.

During the events of the game, it is revealed that Urick made a pact with a reaper of the land, with the price being his mortality. When Caim cuts down Urick the reaper takes over his body and is subsequently defeated by Caim.

Specters are giant evil spirits that take the form of a grim reaper carrying scythes. They are quick and agile enough to deflect projectiles that are fired at them and move out of firing range. They will also attack if the enemy is close. They will also attack from a distance by throwing their scythes, which will fly back to them or reappear in their hands using magic. However, during this attack, they are vulnerable to their enemy and cannot defend themselves without their weapon.

They are commonly seen in the Imperial Capital.

Retrieved from "https://drakengard.fandom.com/wiki/Specters?oldid=18752"
Community content is available under CC-BY-SA unless otherwise noted.