This article is a stub. You can help Drakengard Wiki by expanding it.

The queen-beast and its children descend from the sky to lay waste to the world. Using its ability to warp the Great Time, it prepared to plunge the world into further chaos, eventually resulting in its end. However, Seere, with the help of Caim and the Red Dragon, was able to freeze it in a timeless zone surrounding the Imperial capital by breaking his pact with Golem, saving the world from its influence.

In a last-ditch effort to save the world, Caim and the Red Dragon charge at the queen-beast. All three of them are consumed by white light and fall into a chasm that splits time and space, which brings them to the city of Tokyo. There, the queen-beast fights Caim and the Red Dragon in a battle of songs. The monster is eventually overpowered and crumbles to pieces. This branch set into motion the events of NieR.

After the queen-beast's defeat at the hands of Caim and the Red Dragon, her corpse dissolves into "maso", otherworldly particles that caused the White Chlorination Syndrome, whereas the particles of the Red Dragon were used as the basis for the development of magic in NieR's world. 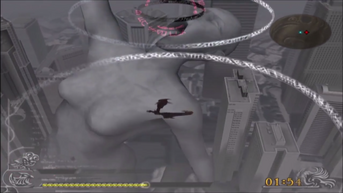 Retrieved from "https://drakengard.fandom.com/wiki/Queen-beast?oldid=17876"
Community content is available under CC-BY-SA unless otherwise noted.