Alive (Branches A, D, Story Side)
Deceased (Branches B, C)

Octa is a sex-addicted Disciple who appears to be an old man, though he claims he is only 22 and had the life drained from him by his sexual exploits. He wields a chakram as his weapon. He looks strange, but is cunning. Among the disciples, he boasts the biggest pride.

Drag-On Dragoon Utahime Five Like the other Apostles, Octa was created by Zero in an attempt to control the flower's power for the Intoners she thought unstable (all but One). She created them from birds who happened to be near her. According to Drag-On Dragoon 3 Story Side, Zero didn't anticipate that the birds could take human form from the power they had borrowed from the flower and decided against creating any other servants. While she was creating Octa, Zero was thinking of Partition, the old man who is influential in Utahime Five and the same one she kills at the start of the prologue chapter. Therefore, when Octa gains his human sentience, he is surprised to be the only one with elderly features.

Three's Prologue Octa accompanies Three to the Cathedral City to dispose of her failed creations, which have met with One's disapproval. They then travel to the Temple of Sands to kill more failed soldiers, where Octa complains about Three's sudden lack of sex drive. He learns that Three has put all of her attention into her "doll making" (e.g. biological experimentation) and doesn't care about sex anymore. Finally, they travel to the Land of Seas, where One has ordered Three to destroy even her successful creations. Octa is horrified and disgusted when he learns that to create her "perfect soldiers", Three tortured and killed 56 humans.

Drakengard 3: Chapter 0 Octa and the other disciples are presumed to be in Cathedral City during Zero's confrontation with her sisters.

Note: This branch ties into Shi ni Itaru Aka.
Octa has never approved of Three's necromancy, or her "new hobby of creating dolls" from previously living people. He therefore approaches Zero's party in the Land of Forest to formally surrender to them. He joins them partly because he is infatuated with Zero but mainly to stop Three. With his guidance, Zero and company reach Three's hideaway. She ignores his pleas to cease her aggression, and he is used against his will to summon their angel, Armisael. Octa keeps traveling with Zero after Three's death. Octa is released by Zero and reverts back to his true form, that of a white dove, fluttering away into the distance.

Branch B: The Price Octa follows Zero until his death at the hands of Cent.

Branch C: Emesis Octa follows Zero until his death at the hands of Two.

Branch D: The Flower Octa has suspicions regarding the nature of Zero's flower, carefully observing Zero's pained reactions. Following the elimination of the undead Five and the disciples, Dito and Cent, Zero and Octa begin discussing the true nature of a disciple. Octa remarks upon their sudden transformation with Zero casually mentioning how it's a side-effect of summoning an Angel without harnessing the power of an Intoner: a disciple loses the ability to maintain their human form. When Zero defeats Three and Decadus is lost in the midst of battle, Octa inquires to Zero about the flower's true nature, with Zero less than eager to recount her mysterious tale. Telling Octa of the flower's origins, Zero mentions how the flower brought her back to life following her brink encounter with death, essentially having turned her into a walking corpse, with all of her bodily functions being maintained by the flower. She acknowledged the flower's intentions as evil, citing that when she killed herself after being revived by the flower, that the flower used its magic and had sprouted five younger girls from within Zero's eye in a manner similar to how she regenerates. Realizing that the young girls had dispersed and began an ironic crusade for peace, Zero decided to seek a higher existence to extinguish the flower's magic and fully eliminate her sisters, that of its intended rival by nature, a powerful dragon named Michael. It is then that she further confirms Octa's claims about her weakening condition, recounting how she had met Accord, with whom she had discussed her limited time. Octa assists Zero in her attack on the Cathedral City. Octa summons Armisael to save Zero from One's attack at the cost of his human form.

Octa is a wizened and experienced disciple who offers imperative knowledge for the party. He is faithful and prompt in his duties.

At the same time, Octa is also highly promiscuous; he can overlook age, the number of participants and even race if it means obtaining the pleasure he desires (he does a horse during the game's main story). He does have some standards, although Zero is somewhat disgusted that he feels troubled giving them up in order to spend a night with her. Obsessed with experiencing "heaven's joy" and "self joy", Octa frequently reads books for obtaining pleasure and considers joy to be a "hole" which needs to be regularly filled. When he isn't busy with his disciple duties, he often states a crude sexual joke or reference in the script.

However, Octa has a kind side, tending to Three when she forgets to do so in the midst of her work, providing her food and evenly trimming the ends of her hair after she cuts it. Prior to finding the horrible truth about Three's activities, he tries to show interest in her creations as she rambles on about her methods, but tells her to calm down when he worries she'll burn out the limited energy she has from her normally lethargic state.

Octa has also displayed a heightened intuition, being the first among Zero's disciples to realize that the flower is suspect as its magic grows more potent while Zero's constitution continues to fade, suggesting that the flower might potentially be usurping Zero's life.

Character designer Kimihiko Fujisaka has said in a Famitsu interview that the disciples were not a main concern for the development team and their designs were approved rather quickly. Producer Takamasa Shiba remarked that they wanted three main male archetypes, and Octa fits the "old man" category. When he was working from Octa's character silhouette, Fujisaka envisioned that the old man was a part of an unnamed organization to make a made-up story connection with his accessories. His tattoo on his forehead was kept based on this concept. Taro Yoko made a brief comment to make certain aspects of Octa's design bigger but offered no other criticism that Fujisaka remembers before it was finalized.

Yoko was the one responsible for associating Octa's sexual habits with the words "self joy". He was the easiest character for writers Sawako Natori and Jun Eishima to understand. Natori jokes that while the words fit his character to a tee, Yoko's influences have pretty much sullied their original meanings. She wishes she had invented them herself. Eishima admits that while she tried her best to have fun doing so, she was inwardly frustrated writing a novel dedicated to "such a character" and boos Yoko for making her do it.

Octa is featured in Anniversary Artwork.
Add a photo to this gallery 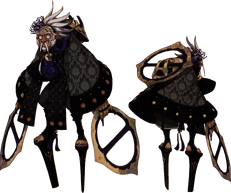 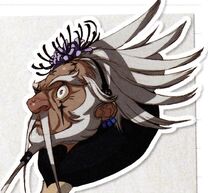 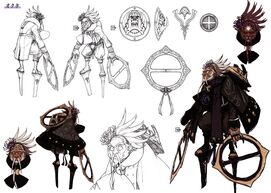 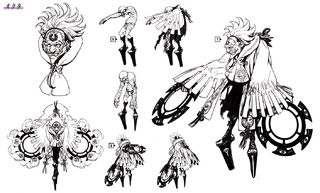 Concept art of Octa
Add a photo to this gallery

Retrieved from "https://drakengard.fandom.com/wiki/Octa?oldid=18820"
Community content is available under CC-BY-SA unless otherwise noted.