Nero is the elven partner of One in Drag-On Dragoon Shi ni Itaru Aka.

It is not known when Nero met One and started assisting him on his mission for redemption. However, he makes it clear he is only helping for the pleasure of watching others suffer.

One day, near the kingdom of Caerleon, One saves the life of the country's princess and her handmaiden. He is heavily wounded however, and is brought into the royal family's castle for treatment. After he recovers, Nero attempts to rape the princess, but is stopped by One. He then instead rapes Shirley as she watches the prince train. After raping her, he locks her in the stables, suspecting that she might be infected. The disease takes hold of her, giving her enough power to break out. She then proceeds to bed several men.

On the birthday of the princess' brother, the Red Eye disease spreads throughout the kingdom. Nero helps One fight the infected and is overjoyed to see the kingdom in chaos. Nero finally finds Shirley and kills her with his crossbow.

Nero reunites with One just in time to save him from the Black Dragon's fire. As the dragon flees, One checks on Caim, who's watching Furiae in horror as she tries to reassemble her parent's dismembered bodies. As One goes to comfort Caim, he stabs One in the abdomen and blames him for his parents' deaths and sister's insanity. Nero carries One away and leaves the prince to grieve.

Sometime later, One and Nero are hunting down the High Priestess of the Cult of Watchers, Fey. However, upon arriving to her sanctuary, they were ambushed by her personal guard. Using his power of song, One was able to overpower Fey's forces and kill her, as well as her son, Chloe.

One and Nero return to the Cathedral City and find that the Red Eyes are protecting innocent people. As they investigate a castle, Nero separates from his partner to indulge in Red Eye whores. During his session, he is strangled and thrown into the dungeon. He promptly escapes and attacks One's Sister. One and Nero fight and it is revealed that One's sister is an impostor. The fake reveals herself to be Nero's sister and says she will use the power of the Red Eyes to create chaos in the world, for her own pleasure. She then calls the black dragon to attack them. However, the dragon turns on her and kills the elf. The dragon reveals that One is the source of the Red Eyes Disease and allows him to live on to continue spreading the plague. Despaired by the dragon's words, One asks Nero to take his life with his own sword.

However, Nero decides to sever One's head with a regular sword instead, leaving him in the form of a living head. The spread of the disease continues, with One unable to do anything to stop it.

He is openly sadistic as he often takes pleasure in One's relentlessness towards innocent civilians, frequently laughing at the atrocities they both commit. He even attempts to rape Furiae and later Shirley, while simultaneously tormenting them psychologically by mocking their feelings for Caim. He portrays himself as an expert marksman. He also states that he ultimately wants to destroy humanity as much as his sister does and wants to watch the world burn with as much terror and suffering as possible.

He carries two crossbows and a double-barrel crossbow used for powerful strikes at large creatures. He is able to kill groups of soldiers from both close and long range. His elven blood also gives him immunity from the plague and the power to fight off dragons. He also secretly has the ability to cast powerful magic. However, due to the seals placed on his body, he will experience incredible pain in the form of blades protruding from his skin whenever he attempts to use it. 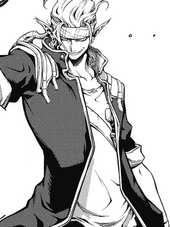 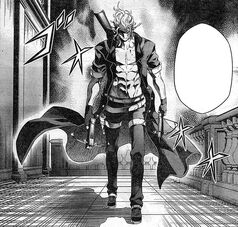 An enraged Nero
Add a photo to this gallery

Retrieved from "https://drakengard.fandom.com/wiki/Nero?oldid=19351"
Community content is available under CC-BY-SA unless otherwise noted.