Michael was a white dragon and Zero's partner.

Michael first met Zero when he was drawn to the battle between the Intoner and the soldiers that served Caerula. He then attempted to kill the Intoner as game, but Zero used Michael's firepower and brute strength to eliminate the soldiers trailing her. While trying to kill Zero, Michael came to notice the flower growing within her and laughed at this realization. Once the soldiers were defeated, he didn't proceed with his attack and only asked to talk with Zero.

While transporting Zero to the mountains, Michael wanted to know more about Zero's Flower. He explained to the Intoner how dragons have an existence deeply connected with the Flower, and that the latter and the dragons were natural enemies due to the dragon race being the only beings capable of destroying the Flower. Michael agreed to help Zero kill her Intoner sisters and kill Zero herself when the task was done.

Once at their destination, Michael tested Zero's strength and power over the Flower by tasking her to kill the magical beasts on the mountain castle in return for not killing her immediately. Zero soon completed the trial, and Michael took her to the Forest Country for another test.

Two months later, Michael served as the final test of strength for Zero within the Temple of Sands and engaged her in battle. Zero won the fight, and as promised, Michael began fighting by her side from then on as her friend and companion.

The sisters are quick to defeat the Lords of all the world's countries and divide the land among themselves.

Michael aids Zero in hunting her sisters. They soar into battle against the Intoners who are under the influence of the Black Flower. Michael destroys the Flower with his fire breathe, leaving Zero to fight One.

Michael dreams about his past. He had lived alone for a long time, having lost everything he loved and everything he believed in. He had fought many battles, killing countless people and creatures, so much that even his dreams were filled of battles.

On the day of promise, Michael and Zero slaughter their way through Cathedral City to confront Zero's sisters. Michael was ambushed by Titans, but he urged Zero to continue without him as he holds off the monsters. When Zero stood face to face with her sisters in Cathedral City, One summoned her own dragon, Gabriel, who severs Zero's arm. Michael, having overcome the Titans, arrived to Zero's aid, firing a shot towards the Intoners, but the strike was repelled. Gabriel shot a steady burst of energy towards Zero, which was mostly blocked by Michael, who died of his injuries. His final wish as a dragon, however, was to reincarnate. He was reborn as Mikhail.

Like all dragons, Michael is boastful and arrogant, believing that the dragon race is superior to all other beings including humans. He enjoys the thrill of battle more than anything. He commonly brags about being the strongest dragon, but underneath that haughty exterior shows a vulnerable side that is also shared with Mikhail. Like Mikhail, he also possesses an inquisitive nature. Michael and Zero were close companions and understood each other well, despite having had a rocky start. 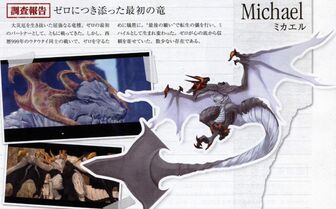 Michael's full artwork
Add a photo to this gallery

Artwork of Michael's novel.
Add a photo to this gallery

Michael in a cut scene

Retrieved from "https://drakengard.fandom.com/wiki/Michael?oldid=18817"
Community content is available under CC-BY-SA unless otherwise noted.