Leonard is an ally and side character in Drakengard. He befriends Seere, who seemed to remind him of his brothers.

A kind-hearted and righteous man who detests the horrors of war, Leonard is a forest recluse prior to the events of Drakengard. Since his parents were killed in the wars between the Empire and the Union, he sought to peacefully raise his three younger brothers - Laum, Riversal and Lukhege. However, he also chose to be a hermit to punish himself for his pedophilia. While he personally wallowed in self-blame and regret, a part of him also felt he should be proud of his sexual preferences. He constantly struggles with this personal dilemma.

He eventually caves into his pedophilia and masturbates in the forest, causing him to be absent from the Empire's massacre of his family and home (the English version of the game leaves his absence unexplained). To him, seeing the dead remains of his brothers was worse than death itself. Filled with self-guilt, he attempts suicide, but fails to do it.

A Faerie, who sensed his trauma, took advantage of Leonard's instability after the death of his brothers to force him into a pact. The pact robs Leonard of his sight, which can be seen on his eyes. Due to the pact's powers, his other senses are heightened greatly to compensate.

Leonard encounters Caim in the woods and joins him on his mission to protect the seals. When Seere joins their party, Leonard takes it upon himself to act as the boy's guardian due to the younger boy's resemblance to his brothers. He hopes to find redemption and peace of mind by doing so. The Japanese script implies he might also be attracted to Seere, but these lines are stated for the sake of black humor and are removed entirely from the English script.

While trying to protect the Forest of the Seal, Leonard and Caim encounter child soldiers in the Empire's army. He pleads Caim to spare them, but Caim doesn't pay heed to his companion and slaughters them without remorse. Leonard attempts to help an injured child who was on the brink of death, but the child soon went berserk and threatened to take his life. Caim mercilessly murders the child before Leonard's eyes.

Leonard follows Caim until the eventual sealing ceremony performed upon the red dragon by Verdelet.

Leonard follows Caim until the eventual defeat of the monstrous Furiae and the awakening of her clones. It is unlikely that he or the rest of the group survive this apocalyptic event.

Leonard follows Caim until the eventual defeat of Angelus and the uprising of the dragons. It is unlikely that he or the rest of the group survive this apocalyptic event.

Note: This branch ties into the events of Nier.
The death of the High Priestess causes the Sky Fortress to collapse, killing the Goddess in the process. Manah's death angers the Watchers, as all order in the world begins to collapse with the final seal's destruction. The Watchers descend from the crimson sky, along with their leader, the Queen-beast. As Caim's party hurries to defeat the Queen-beast, they are surrounded by a horde of Watchers. After Arioch's demise, Leonard decides to sacrifice himself for the Caim and Seere's safe passage. Silencing the complaining Faerie, he uses his magic to self-destruct, taking a horde of the giant monstrosities with him.
Note: These events DO NOT follow Branch A of Drakengard.

Leonard is mentioned though not seen in Drakengard 2 by a villager, where he left the village after being peculiar around the village children.

His weapon, Tower of Warning, can also be found, and used by Eris.
Note: These events follow Branch A of Drakengard 3.

Leonard teams up with a green dragon to protect a small frontier village. In order to help heal the hearts of the villagers, he gathers and directs an all-boys choir. There appears to be some record of him being involved with the Union.

Leonard is a kind and gentle person. He dislikes taking the lives of others and cannot take his own. As a kind-hearted man in the heart of war, he is weighed down heavily by depression and self-hatred. He displays overt fondness for children. With the loss of his family, he feels like he has no more reason for living.

His pact-partner constantly mocks his flaws and weaknesses. Before meeting Seere, Leonard followed Caim in hopes that he would be killed.

Despite his distaste for war, Leonard is not unskilled in battle. His pact with Faerie is also giving him even more power to use.

According to Taro Yoko, many scenes which explored his past and pedophilia were planned. However, they were heavily debated amongst developers for their tact and respectfulness; the scenes which remained in the game were the ones which were universally agreed upon by the team. They particularly wanted to portray him as a character who is suffering from guilt, which they think is a better fit for the game's tone. Yoko said that Leonard was roughly based on Sleggar from Mobile Suit Gundam.

According to his comments in the Dengeki Online interview series, Leonard's character and story was penned entirely by Yoko. Jun Eishima, series's writer since Drakengard and author of the databook novels, adds that Yoko had not entirely explained Leonard's character or personality to her before she was given the assignment to write about him. When Eishima wanted to know about Leonard's unexplained absence before his introduction cinematic, she was surprised by how straight-forward Yoko was in answering her.

Dengeki Online conducted a follow up interview series to their character popularity poll with series's producer Takamasa Shiba and series's character designer Kimihiko Fujisaka. Shiba prides Koichi Yamadera's performance for Leonard as a guilty pleasure which could have only been pulled off by Yoko. When asked about his gauntlet, Fujisaka didn't have a particularly deep reason for including it into the design. His main concern was to not have a fully armored character in the main cast to better distinguish them from the mobs within the fantasy setting. 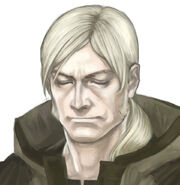 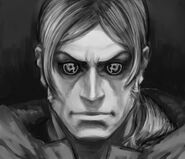 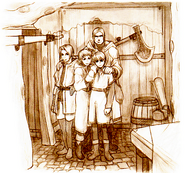 Lord of Vermillon Re:2 card

Leonard and Faerie as they appear in Lord of Vermillion.