Kuroi Uta (クロイウタ?) is the theme song of Drakengard 3, which is sung by Eir Aoi. The song was released in the album "Sirius" alongside the opening theme of Kill la Kill anime on 13 November 2013. The stand-alone single was released on iTunes on November 6, 2013.

Aoi was asked to sing the song for Drakengard 3 because she is a fan of the Drakengard series. The rerecorded international version uses Emiko Rebecca Evans for the vocals.

According to producer Takamasa Shiba, the lyrics are meant to be in Japanese. They are not grammatically correct and focus on literary imagery in ode to the lyrical style found in Nier. Taro Yoko personally requested for Kikuchi to make them hard to understand.

Since the international version remains faithful to the phonetic pronunciations, various fans have contributed to interpretive translations.

A Korean fan under the username "Toma" attempted to interpret the lyrics into modern Japanese. His interpretive translation can be found here with an English translation listed below:

The song of catastrophe
morphs men into beasts

Plucked from the rivets of time,
humans now shunned by the cycle of rebirth

The wings of the apostles flutter by
with the dark castle's wishes
Somehow, the chroniclers of truth
whisper from faraway

A broken eye remains
with that voice from the black flower

Regrets frozen in a heart of ice,
Zero dances in a nightmare

A form of nothingness unbound by death,
she emerges from the forest drenched in blood
To destroy the detestable flower of taboo,
she cuts off her weaknesses

Black flowers give voice
to prayers drenched in blood

When that disaster strikes the city streets,
people and dreams will be broken

To end the repeating cycle,
she goes to terminate
the forbidden sound and flower

Rekka Alexiel has also worked on an interpretive translation of this song listed below. The original posting of this translation as well as many of the others from the official soundtrack can be found here .

All stolen away
The music as needles
As I’m reborn again, alone

Spreading my wings I soar with death
Love shall spring from the darkest of white
When or how distantly may it be heard
How sweetly they whisper, the wings of the past

The black flower
Is the voice
With just its shattered eye

This disaster
Shall wait and fall
For the time it shatters, to dream

As this repeats
We go our separate ways
You shan’t be forgiven, flower of song,
In the final moment 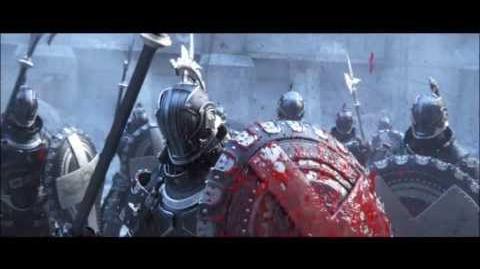