14 in The Song of Fourteen Years
20 in Drakengard

Inuart is a secondary antagonist in Drakengard. He is Caim's best friend and later his rival. He was Furiae's fiancé until she became the Goddess. It was due to his actions that Nowe came into existence.

See also: Inuart's Novella and The Song of Fourteen Years

Inuart is the son of a noble named Ipris (イプリス), a man who once opposed Caim's father in war before allying with him. Ipris was trusted and loved by the king, and the king wished that their two families would be close to one another. This led to Inuart being close to Caim and Furiae during their childhood. He was treated like a second son by the king.

During his youth, Inuart received the same sword training as Caim. However, it soon became apparent that Caim was besting him in every lesson. The only talent he had over his friend was music, which he began to cling to as his lone comfort. Furiae was fond of Inuart and his melodies and was often requesting for him to play. The two eventually fell in love through their meetings. The king was overjoyed by their mutual attraction and approved for them to wed.

The Song of Fourteen Years

As Inuart spent more time with Furiae, he became fully aware of her deeper affections for her brother. He suffered an inferiority complex over the revelation. For him, it was as though he would never be better than Caim and that his friend was always taking everything away from him. Yet, even with his wounded pride, he still respected Caim like a brother. Unable to swear loyalty to the throne, Inuart neglected his studies with the king and sought to train with the local soldiers instead. Ipris disapproved his son's decision, as he thought Inuart was rebelling against their rightful spot beside the king. He told his son to believe in loyalty and valor for one's lord in order to protect their homeland. After receiving his father's scolding, Inuart eventually returned to the imperial palace.

On Caim's eighteenth birthday, Inuart and Caim sparred with one another. Caim thought that it was a friendly session, yet Inuart's heart was sated with jealousy and hatred towards him. In the heat of the moment, his sword struck and wounded Caim. Furiae was watching their match and immediately ran to her brother's side. Caim thought nothing of the injury and quickly forgave Inuart, yet his friend was alarmed by his actions and brooded in self-guilt. It was on this same day that the Black Dragon attacked and killed the king and queen.

The siblings mourned for their parents, yet Inuart could not stay by their side to console them. He busied himself by helping his father's work for maintaining the kingdom. As the people and nobles left, however, it became apparent that his efforts were for naught. Without the king, no one was willing to stay. Ipris, who worked to the bone for the kingdom's restoration, succumbed to illness a year later. His friends had left and Inuart lived alone at their former homeland, dwelling on his music.

Note: These events are not considered canonical.

Inuart's past is altered in the unfinished comic adaptation, Drag-On Dragoon Judgement. In this narrative, he is only childhood friends with Caim. They shared their first battle together against the Empire. Afterwards, he was engaged to Furiae in a political marriage. Since he hadn't met her yet, Inuart was unaware of the Goddess seal on Furiae and was suspicious of Caim's dramatic change in behavior during their fights with the Empire. Once the populace became aware that the previous Goddess had perished, they mourned and feared for their future. It was due to this paranoia that Inuart and Furiae's engagement was called off. The narrative stated that Inuart would learn of a slanderous rumor regarding his former fiancée –possibly about the seal– but it prematurely ended.

Eventually, Inuart gains the courage to leave his home and search for his friends. He helps rescue Furiae from her household after the Empire attacks. He and Caim soon flee to the elf village only to find that it has already been destroyed by the Empire. Breaking down upon this sight, he begins to resent the fact that he is weak compared to his best friend Caim, and loses value in his talent in singing. Inuart takes Fuarie and they continue on their journey without Caim.

Soon after meeting Hierarch Verdelet, Inuart is taken captive by the Empire. In prison, he is tortured and brainwashed, with his insecurities and obsessive love for Furiae being used against him. He soon swears allegiance to the Empire and makes a pact with a black dragon. He confronts Caim and defeats him in battle. He kidnaps Furiae and takes her to the Empire where he believes she will be safe.

However, when Furiae commits suicide, he realizes that by bringing her to the Empire, he had ensured her demise. He flies into battle with Caim again and shows his longing for Furiae by saying her name repeatedly during the battle.

Broken and unstable, Inuart takes Furiae's corpse and flies from the sky fortress, the legend of the seeds of resurrection in his mind. While Caim decides to pursue Manah, Inuart takes Furiae's corpse to the Bone Casket; a special Seed of Resurrection present in a location known as the Promised Land. There he enters the bone casket himself with his betrothed's corpse "for love and greed".

This fusion creates a baby child, known as the New Breed, being produced by the God's plaything as well as possessing the heart of a dragon (see Pact).

Inuart's black Dragon takes this child and raised him as his own. The child turns out to be Nowe.

Inuart decides to take Furiae to one of the Seeds of Resurrection, believing that it will resurrect her. Caim races to stop him, but doesn't reach him in time. The Seed does in fact revive Furiae, but she is reborn as a winged monster and not the girl he loved. The monstrous Furiae kills Inuart and is ultimately defeated by Caim & Angelus. Unfortunately, though the original Furiae is defeated, numerous clones are created from the other Seeds, ready to destroy the world.

Inuart decides to take Furiae to one of the Seeds of Resurrection, believing that it will resurrect her. Caim races to stop him and succeeds. Inuart dies, with the dead Furiae lying next to him.

Caim manages to find the Priestess before finding Furiae. She is revealed to be the sister of Seere. After realizing that she's beyond hope, Seere asks Golem to kill her. Her death causes the Sky Fortress to collapse, killing both Furiae and Inuart, who fail to flee.

Caim manages to find the Priestess before finding Furiae. She is revealed to be the sister of Seere. After realizing that she's beyond hope, Seere asks Golem to kill her. Her death causes the Sky Fortress to collapse, killing both Furiae and Inuart, who fail to flee.

As reported by a recorder, although present in the original Drakengard timeline, Inuart is not in Caerleon when Caim's parents die this time around. This is implied to be due to One and Nero and possibly because pacts don't exist.

The only person Inuart trusts explicitly after escaping from the destruction of Caerleon is the psychologically damaged Furiae. As they travel together, Inuart's stubborn personality becomes apparent when he refuses to listen to anyone besides her.

Inuart is a rather simple man that loves his music and harbors a deep love for Furiae and would do anything for her. He has proven to be very brave, earnest and passionate in his devotion to Furiae and friendship to Caim. Despite these noble qualities, he is very insecure about himself as he constantly doubts his own strength and is quick to sink into despair over his own lack of ability. He is jealous of Caim, for both his strength and for being the object of his sister's affection, but he still thinks of him as a friend.

However, after he is kidnapped by the Empire, he is brought under the influence of Manah, whose mental torture brings out the darker traits of Inuart's personality. Inuart becomes cruel, maniacal and more confident in his own strength, a great contrast to his former self. His jealously of Caim turns into outright hatred and his love for Furiae quickly became an obesssion to please her. He was very wrathful and very easily entered fits of rage. He had displayed many murderous tendencies and laughed maniacally, giving off the impression of insanity.

Inuart is a skilled musician, often playing songs for the royal family. He is also a skilled swordsman, although nowhere near as skilled as Caim. After making a pact with the black dragon, his power greatly increases.

During the early phases of development, Inuart was initially designed to be the game's protagonist. He was originally going to fight Caim for the sake of saving the world. The team decided against this idea by conceptualizing Furiae. Out of the characters within the main cast, he was one of the quickest to be finalized. Cavia producer, Takuya Iwasaki, chose his name since he liked its difficult pronunciation. Inuart had no particular character inspiration for his personality other than being the "rival" character.

Dengeki Online conducted a follow up interview series to their character popularity poll with series's producer Takamasa Shiba and series's character designer Kimihiko Fujisaka. Shiba says he likes Inuart more than Caim and would like to make him a proper protagonist in a project someday. He adds that many of Toshiaki Karasawa's recordings were done in one take. Fujisaka is embarrassed by his design since he feels it shows the immaturity as an artist. He was told Inuart was too wild for the protagonist role he was originally designed to have in the first game. 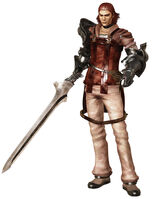 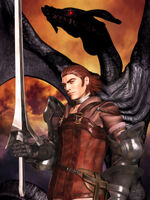 Inuart and his Black Dragon. 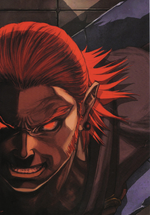 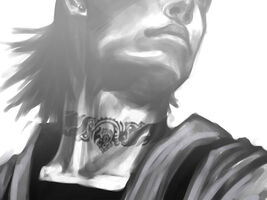 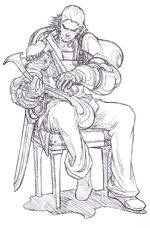 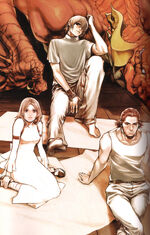 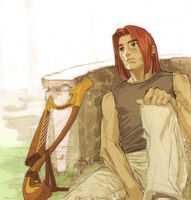 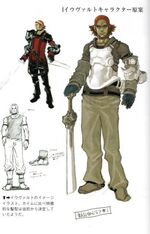 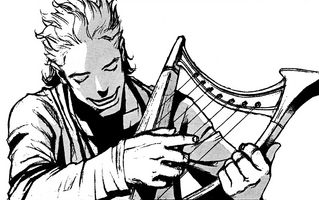 Inuart in Judgement.
Add a photo to this gallery

Retrieved from "https://drakengard.fandom.com/wiki/Inuart?oldid=18788"
Community content is available under CC-BY-SA unless otherwise noted.