An Intoner (ウタウタイ, Utautai?) is a god-like being introduced in Drakengard 3 that possesses enhanced magic capabilities through the manipulation of magic via Songs. They mostly appear in the form of beautiful, young women branded with numbers on their foreheads.

The Intoners are hailed as Goddesses descended from the skies due to their bountiful gifts of peace and tranquility to the peoples of Midgard. Their abilities vary in certain respects although their strengths retain a similarity in that most are equally capable of eliminating one another, with a select few possessing outstanding aspects overall. While experiencing a remarkable magnitude of strength, the Intoners are also subject to the odd side-effect of having a certain part of their body growing at an increasingly dangerous rate - for example, Three's hair and (one of) Four's nails.

Intoners are also known to have a very high sex drive and depending on the Intoner's personality, she may either range from being a virgin to being utterly insatiable. They usually possess bodyguards called Disciples to sate these sexual desires, while also defending the Intoner in question. They can also lend their powers to the Disciples to summon forth their magnificent beasts called Angels when faced with the threat of danger. When completely dominated by the flower, an Intoner can also summon Angels unaided, and even a dragon.

Prior to the arrival of Intoners to the world, they are never mentioned within the annals of history. It is later revealed that the reason for a lack of information regarding Intoners is that they are actually beings created to destroy humanity and essentially, the world itself. The parasitic flower inhabiting Zero had manifested for itself a corporeal host to destroy the world as that had been its sole purpose. Upon realization of what the flower had intended, Zero committed suicide, only to be resurrected by the accursed flower that had also been made aware of her intentions.

In retaliation to Zero's suicide attempt and as a defense mechanism, the flower creates five copies of Zero based on her memories and aspects of her personality, splitting Zero's power among them. Upon their birth, Zero realizes their potential as a threat to the world, but they escape before she can kill them. Hence, the events of Drakengard 3 depicts Zero annihilating her "sisters" in order to save the world and out of personal guilt for bringing them to existence [1]. Upon being killed, their bodies release a grand cloud of black smog, signalling a release of the flower's evil powers. As Intoners are vulnerable to the powers of a dragon, Mikhail consumes their bodies to enhance his own abilities.

In battle, Intoners display an elevated combat ability interspersed with their individual powers. They also have the capability of entering a state of extended power. Since Intoners possess a share of the power granted by the flower to Zero, they also possess a modicum of regenerative abilities, albeit slightly weaker. When an Intoner other than Zero taps into the flower's regeneration ability however, she may actually turn into an undead zombie rather than retaining her form in life as illustrated in the case of Five.

During the final confrontation between Zero and One, Mikhail is mortally wounded. After One is killed, Zero is killed by her male clone. The male One eventually sets up the Cult of Watchers in his sister's memory and leaves descendents among the human population, meaning the Intoner bloodline persists.

After Five and Four's deaths, in the Land of Forests, the environment is destabilized, and the remaining three Intoner sisters are in the forest. Three dies from the poison of the forest, while One is killed by a deranged Two. In the battle with her, both Two and Zero's disciples are killed, but Mikhail is killed by a Watcher summoned in Two's final moments. Zero then transplants her flower into Mikhail and creates the first pact, resurrecting him and regressing to child form.

After Zero kills Five, Four and Three, they next meet Two in the Cathedral City. During the battle, the disciples kill her and are killed themselves when Two explodes. Zero and One then engage in battle: their dragons are killed and they are sent into rages. One is killed by Zero, but Zero is left in a mentally broken state.

The Intoners excepting Zero and One are consumed by the Flower's power, with Two hinted to have been killed by it. Each of the surviving Intoners is able to summon either a Watcher or a dragon of some kind Four is sent insane, and Five's attempt to resurrect herself transforms her into a zombie-like vessel of the flower. Zero kills them both, then confronts Three, who is able to summon an Ancient Dragon without it breaking her mind. Zero and Mikhail eventually succeed in killing the dragon and Three.

After their final battle, Zero consumes One and allows the flower to bloom within her. Giant statues of the six Intoners appear with the flower as a base and with Zero in the middle. This results in a rhythm mini-game wherein the player controls Mikhail and needs to be in tune with the movements of the Intoner statues and the song playing within the background. Following completion of the mini-game, the Intoner statues crumble into pieces. It is mentioned by Accord that the Intoners are sealed in another dimension, nullifying their threat.

During the final confrontation between Zero and One, Mikhail is mortally wounded. After killing One, Zero transplants her flower into Mikhail and creates the first pact, resurrecting him and regressing to child form.

Moments later, Zero and Mikhail are attacked and killed by One's brother. The male One eventually sets up the Cult of Watchers in his sister's memory and leaves descendants among the human population, meaning the Intoner bloodline will persist. 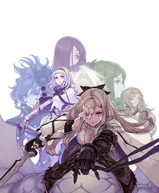 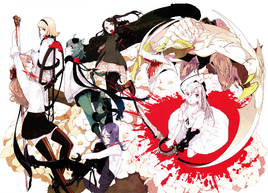 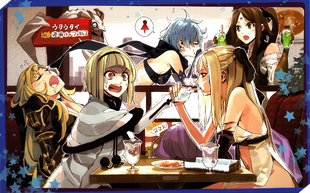 Artwork of the Intoners after becoming fully-possessed by the flower.
Add a photo to this gallery 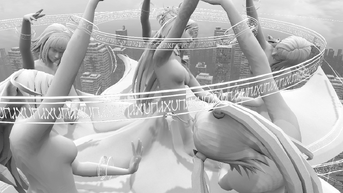 Screenshot of Intoner Sisters.
Add a photo to this gallery

Artwork of the Intoners.
Add a photo to this gallery

Retrieved from "https://drakengard.fandom.com/wiki/Intoner?oldid=18091"
Community content is available under CC-BY-SA unless otherwise noted.