Kojima Sachiko
Hanch was a Lieutenant of the Knights of the Seal and the guardian of the District of Hallowed Water.

In Dengeki Online's character popularity poll, she was voted to seventh place by fans.

Hanch was adored by all and was known as "Sunsmile" when she was a child. She fell into a lake whilst playing on a boat, and was offered a pact by a creature known as Kelpie in order to save her life. The pact price was her allure and charm, and in result, she became a dark, brooding person, and most will not voluntarily approach her.

Hanch eventually joined the knights and became the guardian of the District of Hallowed Water. It is later revealed by Gismor that Hanch aided him in the murder of Oror by supplying the poison he would later offer to Oror as a drink. She was eventually killed by Nowe and Manah.
Spoilers end here.

Hanch uses a lance when in battle and can be assumed to be quite skilled with it. She fights together with her pact-beast and seems to have an affinity for water-based attacks.

Hanch with the Drakengard 2 cast

Hanch with Kelpie in the background

Artwork depicting Hanch drowning in water as a child, which led to her meeting her pact-beast, Kelpie.

Hanch's pact mark
Add a photo to this gallery 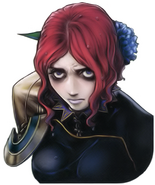 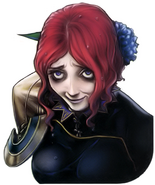 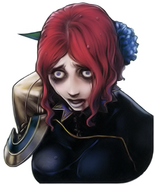 Retrieved from "https://drakengard.fandom.com/wiki/Hanch?oldid=18800"
Community content is available under CC-BY-SA unless otherwise noted.