Gabriel is a black dragon that appears in Drakengard 3. He is One's trusted companion and protector. He was originally a female purple dragon named Gabriella until she allowed One to transform her into a daemon.

During the confrontation of the Intoners in the Cathedral City, One summons Gabriel, whose blast kills Michael and cripples Zero by tearing apart one of her arms.

Branch A
One calls upon Gabriel once again to deal with Zero and Michael's reincarnated form, Mikhail. The Demon Beast Dragon was already attacking Mikhail prior to Zero confronting One, though soon fights both Mikhail and Zero with One riding on his back. During the battle, Gabriel proves to be too powerful for Mikhail, nearly killing him. On the verge of death and instead of wishing for his own reincarnation, the dying Mikhail wishes for Zero to win the battle, allowing Zero to kill both One and Gabriel. As One dies, she apologizes to Gabriel for her failure, showing the bond between him and One before he vanishes.

Branch B: The Price to Pay
Due to One's death, Gabriel does not appear.

Branch C: Vomit
Gabriel is summoned by One and unleashes a single attack, which Mikhail manages to counter. The countered blast destroys Gabriel, but Mikhail is killed as a result of the struggle.

Branch D: Flower
Gabriel battles with Mikhail while their Intoner companions face each other, dying when One dies.
Spoilers end here.

Although he possesses the mind of a primal beast, Gabriel retained his bond and loyalty to One. The transformation bestowed upon him by One enhanced his power so much that his strength overpowers the most powerful dragon, Michael. 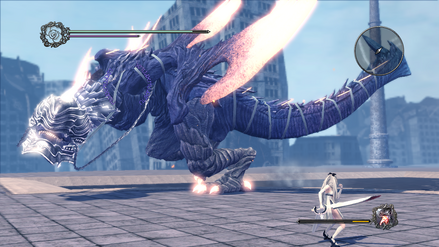 Retrieved from "https://drakengard.fandom.com/wiki/Gabriel?oldid=18824"
Community content is available under CC-BY-SA unless otherwise noted.