Drakengard Wiki
Register
Don't have an account?
Sign In
Advertisement
in: Articles to be expanded, Characters, Intoners,
and 9 more
English

Ruler of the Land of Seas

Deceased
(Branches A, B, C, Story Side)
Sealed (Branch D)

Things (she has) not eaten before, as well as Crab.

Five is one of the antagonists in Drakengard 3. She is an Intoner who governs the Land of Seas and is considered to be the youngest of the six sisters. She is the most provocative among the sisters. She also has a strange attraction to Zero. She was based on a nun that Zero killed.[1]

Her disciple was a young man named Dito who has the face of an angel and a mind without filters. The Angels she summons are an aquatic crab-like creature called Phanuel and undead soldiers known as Galgaliel. Like her sisters, she exhibits spectacular growth in a specific part of her body. In particular, her breasts grow at an ever alarming rate, which seems to fuel her personality with bravado and confidence much to the envy of her other sisters.

See also: Five's Novella and Memories of the Intoners

Together with the other Intoners, with the exception of Zero, Five sought to bring peace to the land. Having succeeded, the head of the group, One, divided the land among the sisters. Five became the ruler of the Land of Seas.

Five, along with the rest of her sisters, is summoned to Cathedral City by One. She is almost the last one to arrive, arriving into the city on February 22nd, 999. The sisters face off against Zero on March 3rd, 999. One summons her dragon Gabriel, who fatally injures Zero and kills her dragon companion, Michael. Five returns back to the Land of Seas to rule it once more.

Five welcomed Zero into her domain, remarking on her sharp tongue. She tells Zero that she reveled in her might during their battle at Cathedral City, so much so that her thighs were aching. She casually mentions how Michael, the greatest of all dragons, has met his end while also mentioning that she would love to make Mikhail her pet after she defeats Zero. She challenges Zero to a battle, invoking her Intoner powers and making Dito summon her daemon, Phanuel. Throughout the battle, Five asks Zero how the other sisters are doing and Zero mentions that she was on the top of the list. Flattered, Five expresses her joy right before Zero mentions that she wanted to work her way down from the stupidest.

Five then comments on how strong Zero has gotten, with Zero mentioning that she's wanted to beat her sister to death for awhile now. Five tells Zero that she's missed her so much and became so thrilled when her sister came to see her that she nearly came. Five makes a remark about Zero's flower, saying that it adds to her sex appeal and made her even sexier than she was a year ago. She goes on to say that her best feature is her round and perky breasts, urging Zero to touch them if she'd like and then suggesting a threesome for the next time.

Following her loss against Zero, the latter stabs Five with her sword several times to ensure her death. As Zero finishes, she wedges her sword inside Five and turns around to tend to Mikhail. Suddenly, an enraged and bloody Five stands up from behind and takes the sword out of her body. While in a deranged state, Five begins her song for Zero until she is sliced in half and dies. Dito reveals himself to have killed his master and proceeds to mutilate and beat her corpse to his liking, also displaying an intense hatred for Five.

Branch D: The Flower
Following her initial defeat, a weakened Five appears before Zero and her disciples with a seemingly broken form, leading Zero to conclude that Five tried resurrecting herself. Five then summons Galgaliel, which amuses Dito greatly. Dito expresses his joy at the insanity of the world and of Five's new form, now telling her that she can do anything she wants to him. Dito summons Phanuel to attack Zero but is stopped by Cent who summons Egregori. Zero then commences battle with Five and her horde of Galgaliel.

After Five and her Galgaliel are defeated, Five walks towards Zero with her arms out-stretched and calls her beautiful while subsequently being stabbed through the abdomen by her sister. Stemming from Five's death once more and Zero's rejection of him becoming her disciple, Dito is made unable to maintain his human form and unwillingly reverts back into a dove.

During the The Final Song she briefly appears before being destroyed by Mikhail.

During the first battle with Five, Zero and Mikhail battle against Phanuel until Five uses the last of her Power of Song. With no strength remaining, Five pleads to Zero not to kill her. Zero then proceeds to stab her in the stomach, mouth, stabs through her left breast (heart), and cuts off her head. Zero continues to slash and disembody Five's body until her arm and shoulder aches.

While looking for Three in the Land of Forests, Zero and the gang find the undead Five, her limbs all reattached. They realize that it was the power of the Flower that resonated from the center of the forest that drew Five near. With little consciousness or understanding of her surroundings, she summons Galgaliel. Half-way through the battle after Zero lops off several of her limbs, she begins to devour the dead bodies of Galgaliel to regenerate her lost limbs and continue fighting. Eventually, Zero gains the upper hand and again reduces Five to a lump of flesh.[2]

Five is somehow revived and fused with Three and Four as a monstrous entity (Nightmare) in the Library, SINoALICE's main setting. The sisters are in constant agony in this form and plead for Zero to kill them. They presumably perish when Zero strikes them down during the event's finale.

Their Nightmare form can be randomly gifted to players through the event gacha or exchanged through Zero Medals. When they are summoned in battle, they can restore 25% of the players' SP gauge.
Spoilers end here.

Five has great confidence, greed, and relentless cravings. The moment she obtains what she desires however, she loses interest. She speaks slovenly and loves to allude to her sex life filled with many, many lovers, who are either men, women or both. Her appetite knows no bounds and thus, she is open to pursuing everything, everyone, anything and anyone. Five is revealed to be a terrible cook whose cooking could literally kill a person because of her wanton interests in weird ingredients that are usually fatal. However, her taste for extravagance has helped Two cope with living in the desert as the difficulty in growing crops forces her to look for alternative sources of foods, particularly a giant sand worm Five wanted to cook. Her interests are mostly towards clothes and her obsession for Dito, who she considers her most favorite toy. Five seems to have a deep longing for her father, who died before she met him, but chooses to ignore it.

Character designer Kimihiko Fujisaka has said in a Famitsu interview that Zero's design was the first to be approved by Taro Yoko. He wanted more female characters to interact with her and requested for Fujisaka to "think Puella Magi Madoka Magica" when designing her sisters. Five's main design themes are "nude" and "knit".

Artwork of Five with her Intoner sisters. 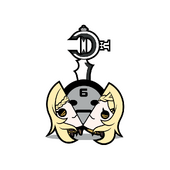 Five and her sisters

Five and the other Intoners 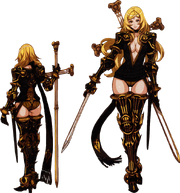 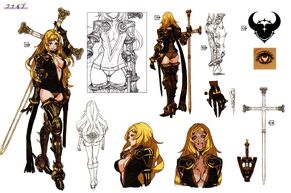 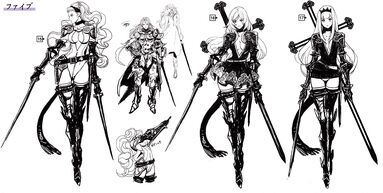 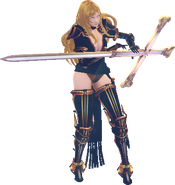 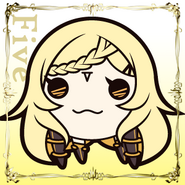 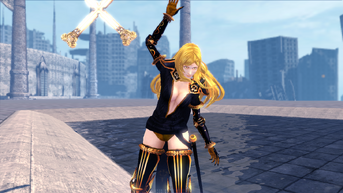 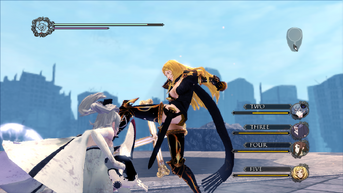 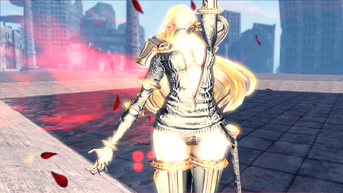 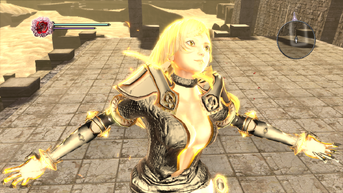 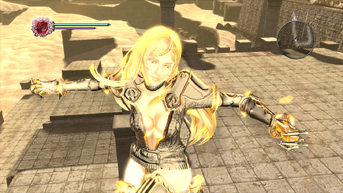 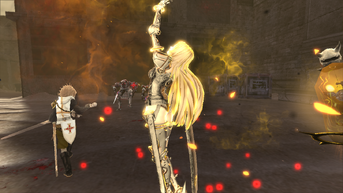 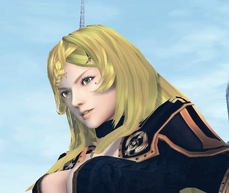 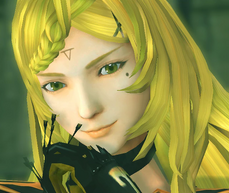 Five about to summon her Watcher.

Five about to meet her fate.

Five back up and removing Zero's blade.

An undead Five reaching towards Zero. 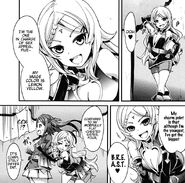 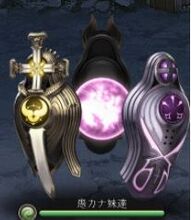 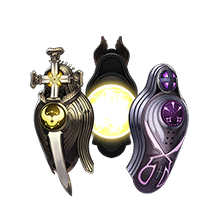 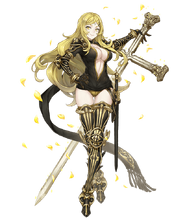 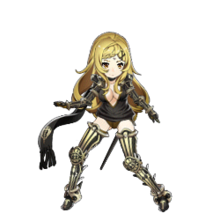