Drakengard, known in Japan as Drag-On Dragoon, is an action role-playing game developed by Cavia for the PlayStation 2 and published by Square Enix and Take-Two Interactive.

The game's theme revolves around pacts, as most characters initiate a pact with other entities to gain certain abilities, and must pay the price of the pact in return.

In 1999, during a night out at the bar, Enix producer Takamasa Shiba and Ace Combat 3: Electrosphere director Takuya Iwasaki brainstormed an aerial combat game with dragons.[1] With Enix's support, Iwasaki quit Namco after completing Electrosphere and founded Cavia with Shiba. The development team assigned to Drakengard was named Project Dragonsphere.[2]

Before Drakengard, Iwasaki and Shiba had no experience with creative writing. Yoko Taro had joined the project as art director, but his art did not impress the team; since Iwasaki was too busy with other projects at the time, Taro was assigned to direct the game and write its script alongside Sawako Natori.[3][1]

Taro worried that the dark tone of Drakengard's story would hamper the game's release. He consulted with Enix producer Yosuke Saito, who flew to Los Angeles to pitch the game to Sony at the E3 event; when Saito arrived, the Sony staff on-site had gone through so many pitches that, out of exhaustion, they approved Drakengard without reviewing it.[3]

Midway through development, the success of Dynasty Warriors 2 inspired Shiba to push for the inclusion of ground battles. As a result, the game had to be redesigned to balance ground levels and aerial levels, while adding flying mechanics to the former. Redesigning Drakengard caused setbacks in development, as the team had trouble running the transitions between melee and flying modes in the ground levels.[4]

As Enix went through its merger with Square, the team's advisory board was repeatedly asked to change the game's content, but Saito refused most of the requests.[5] Yoko Taro had planned the game for two DVD discs, but time constraints forced the team to reduce its size to one disc and remove a jump feature which could not be debugged within the deadline. Drakengard's development proved so stressful that Taro swore off working on a sequel at the time.[6]

Yoko Taro wanted Drakengard to stand out against Square Enix's flagship franchises Final Fantasy and Dragon Quest. To achieve this, the world of the game was made dark and desolate and the cast was written as morally gray, with taboo themes such as incest, cannibalism and pedophilia. Taro created the backgrounds of Seere, Leonard and Arioch; while Takuya Iwasaki created Caim, Inuart and Verdelet.

The world of Drakengard is heavily influenced by European folklore[2] and the 1995 anime Neon Genesis Evangelion. The latter in particular shares a core trait with Drakengard: its formulaic premise is a hook for a darker cosmic horror story. Because Taro was told the game would not have a sequel, Drakengard is infamous for its five endings, all of which are tragic; Taro did not intend them to be truly depressing, but rather to present painful and bizarre experiences for the playable cast.

Ending E was added by Taro and a small group of developers as a practical joke and a homage to The End of Evangelion. This ending was only revealed to the rest of the team at the end of Drakengard's development; while it irritated Shiba, Iwasaki pushed for its inclusion. It became the game's most famous sequence, due to its bizarre premise and disconnection from the rest of the story. Taro was surprised by the reactions from players and developers alike, which partially drove him to revisit the scene for Nier. Taro eventually revealed that Ending E was first conceived as a singing competition against a giant version of pop singer Ayumi Hamasaki, but the plan was immediately rejected.[7]

Drakengard features a story mode and a "Free Expedition" mode that allows replays of completed levels.

The gameplay is divided among three types of levels. In ground levels, Caim and his allies run on foot attacking enemies with one of up to eight equipped weapons, each with their own unique magic spell. When in wider open spaces, Caim can ride on Angelus's back to travel faster and attack with dragonfire. The story mode also features shorter narrative-centric "strafe" levels, where Caim must run to the objective without the need to defeat specific enemies.

In aerial levels, the player flies on the back of the dragon to shoot at enemies in mid-air with fireballs and locked-on energy blasts. Both Caim and Angelus gain experience and level up as they defeat enemies, which raises their hit points and attack power. At certain points, the dragon may evolve into a more powerful form that enhances its attacks and allows it to lock on to more enemies.

The story mode is divided into chapters, each sub-divided into separate levels and cutscenes called Verses. Verses labeled with Roman numerals lead to endings other than the one obtained from Chapter 8, and require certain goals to be met. The player does not need to make a new save to obtain the extra endings.

Drakengard takes place in a world named Midgard, protected from the Watchers by four Seals: the Seal of the Ocean; of the Desert; of the Forest; and the Goddess of the Seals herself. The Empire has been subjugated by the Cult of the Watchers, and seeks to summon the Watchers by destroying the four Seals.

Caim fights off the Imperial army, which is laying siege to Furiae's castle, until he is mortally wounded in the battle. He eventually finds a dying red dragon chained to the castle grounds; despite his hatred of dragons, Caim demands a pact to save both their lives. The dragon reluctantly accepts the pact, but Caim loses his voice and becomes mute as a result.

After fighting the Empire's air force, Caim and the dragon regroup with Furiae and Inuart. At Inuart's suggestion, the four flee to the elf village near the Seal of the Forest, only to find the village invaded and the seal destroyed. The dragon hears the voice of Hierarch Verdelet, who pleads the group to bring Furiae to the temple containing the Seal of the Desert. Caim learns from a dying elf that several cultists have taken hostages to the Shrine of the Watchers. He sets off to rescue the hostages, while Inuart takes Furiae to the desert temple.

Caim fights through the shrine, only to find that the kidnapped elves have been taken elsewhere. Later, within the Valley of the Faeries, Caim meets Leonard, who joins him as an ally. The dragon reveals that Inuart and Verdelet have been captured, so the group quickly set off to the Seal of the Desert. Unbeknownst to Caim, Inuart has been tortured and brainwashed into serving the Empire, and has sealed a pact with the dragon that killed Caim's parents.

Arriving at the desert, Caim finds Furiae safe, but Inuart and Verdelet have been taken as prisoners. Caim goes to rescue them from an Imperial prison, only to find Verdelet alone with Inuart nowhere to be seen.

They return to the desert, but the seal is already broken. The group meets Arioch, a murderous elf that lost her family to the Empire. After Arioch joins the party, Inuart appears, defeats Caim in a brief duel and kidnaps Furiae, intending to save her from her fate as the Goddess. Caim holds off on rescuing Furiae to go to the Seal of the Ocean, but the seal has been destroyed.

Verdelet explains that destroying all seals will scatter "Seeds of Destruction" throughout the world, capable of creating a legion of murderous monsters from one human corpse. The party arrive at the Imperial Lands and meet the young orphan Seere, who pleads to join the group to search for his sister, who was kidnapped by the Empire. It is revealed that Seere has a pact with a golem in exchange for his aging, or his "time". The group joins a final battle between the Union and the Empire, where the Union wins. However, the Union army is immediately blasted by an unknown force from the sky, which raises the Empire's soldiers from the dead.

An Imperial fortress appears in the sky. Caim, Angelus and Verdelet fly into the fortress, only to find Furiae has committed suicide and broken the final seal in the process. Upon finding Furiae's dead body, Inuart is freed from his brainwashing and escapes the fortress with her.

the Anguish of an unsmiling Watcher
Caim and the dragon confront Manah in the Sky Fortress. Verdelet attempts to seal her powers, but the spell backfires and turns Manah into a giant.

Defeated by the dragon, Manah begs Caim and Verdelet to kill her, but they coldly turn her away and the dragon says she must suffer for her atrocities. With the four seals destroyed and Manah rendered powerless, the dragon offers to become the new seal. Verdelet reluctantly accepts; while he performs the sealing, the dragon uses her last breaths to tell Caim her true name: Angelus.

On sacrifices countless will a new shrine be built by the hands of the gods.

flowers for the Broken spirit
Inuart takes Furiae's dead body to a Seed of Destruction, which resurrects her as an angelic monster. She immediately kills Inuart and engages Caim in an aerial battle, but is defeated.

Later, while Caim holds Furiae's dead body, the other Seeds of Destruction spawn several copies of the monstrous Furiae.

A woman turned into a stake will hold the world in a basin of fire.

a Companion's eternal farewell
Manah desperately summons a dragon, which immediately rebels and eats her alive. Now transformed into a Chaos Dragon, Angelus breaks her pact with Caim, reveals the dragons are revolting against mankind and reluctantly challenges him to a duel. After defeating Angelus, Caim escapes the Sky Fortress to fight off the rest of the dragons.

A pitiful child shall defy the hands of the gods, and a door will close.

the wild dreams of a Deluded child
In the Ocean Fortress, Seere attempts to talk Manah out of the Cult of the Watchers, but is rejected. He desperately orders Golem to kill her, and her death unleashes the Grotesqueries and their Queen-beast upon the world. Leonard and Arioch die to the Grotesqueries.

The Queen-beast begins to devour all of time and space. Seere offers to sacrifice his pact power and freeze her and himself in time. After flying Seere to the Queen-beast's belly, Caim and Angelus are killed by the Grotesqueries and the Imperial Capital is frozen in a massive black crystal.

At long last, the jumping hands of time will be halted by a weakling cast in eternal solitude. 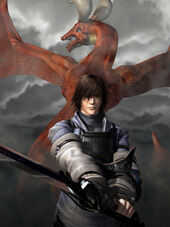 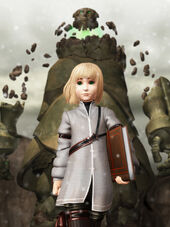 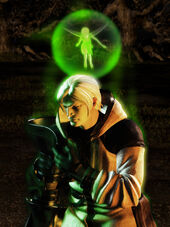