Dove (Branches A, D, Story Side)
Deceased (Branches B, C)

Decadus, also known as Decad in the Japanese version, is a super masochistic middle-aged man who fights with his fists and has a well-trained body.

Like the other Apostles, Decadus was created by Zero in an attempt to control the flower's power for the Intoners she thought unstable (all but One). She created them from birds who happened to be near her. According to Drag-On Dragoon 3 Story Side, Zero didn't anticipate that the birds could take human form from the power they had borrowed from the flower and decided against creating any other servants.

Decadus - Everything Is For You

Decadus and the other disciples are presumed to be in Cathedral City during Zero's confrontation with her sisters.

Decadus assists Four's defense atop her airship by summoning their angel, Armaros. Mikhail defeats the angel, and Zero uses deception to slay Four. Decadus meekly tried to protect his Intoner, but he feared too much for his life to defy Zero. He requests for her to kill him next. Zero spares him and recruits him to her party, thus leading to Decadus's allegiance to her.

Upon arriving at the cathedral of Cathedral City to face off against One, Zero bids adieu to her disciples, reverting Decadus and the rest into their true forms as doves and setting them free. Following Zero's death, the doves are later seen scurrying about by her corpse, flocking to Accord who vanishes as mysteriously as she appears.

Decadus follows Zero until his death at the hand of Two.

Decadus follows Zero until his death at the hand of Two.

Decadus assists Zero in her fight against Three and her dragon, Ezrael. He summons Armaros to slow down the beast's movements, at the cost of his human form.

Decadus assists Zero in her fight against Three and her dragon, Ezrael. He summons Armaros to slow down the beast's movements, at the cost of his human form.

When compared to the other disciples, Decadus has a fairly normal personality. He is described as a "perfect gentlemen" with his duties as a disciple, and always speaks in a polite and mannered style. Even when he is angry, he refrains from ever swearing or belittling his opponent, putting him in sharp contrast with Dito or Cent. He is also loyal in a way that none of the other disciples are: until she is killed, he is fanatically loyal to Four, and shows a similar loyalty with Zero. However, even when in the presence of his former Intoner, his loyalty to Zero does not waver. He is also the one disciple that Zero doesn't actively lash out at, except when she is speaking to the group in general.

However, alongside this, he has a darker side: he is an extreme masochist who turns pain and agony into his personal reward, whether it be in battle or as part of his personal duties to Intoners. His original desire to serve Four was strengthened when she asked if he would die for her, an offer which he found very arousing. While he tries to keep his preferences mostly under cover, he often lets some remark slip out, alerting the others. He even takes the visible signs of sexual arousal as a shame. It also ends up interfering with his duties to Zero, who at one point chastises him for his repetitive requests for "punishment".

Character designer Kimihiko Fujisaka has said in a Famitsu interview that the disciples were not a main concern for the development team and their designs were approved rather quickly. Producer Takamasa Shiba remarked that they wanted three main male archetypes, and Decadus fits the "middle-aged man" category.

Jun Eishima, despite being the writer for the character novels, is often left in the dark about the details of Drakengard because Yoko will not always tell her everything she wants to know. So she has to imagine herself through Decadus and many other character's perspectives while she writes based on the brief outline she is given. When she saw the disgusted Twitter reactions to Decadus's novel, Eishima felt weirdly apologetic. 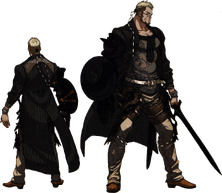 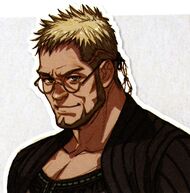 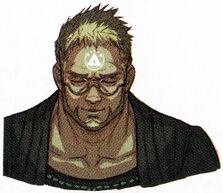 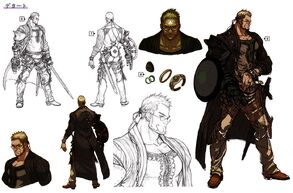 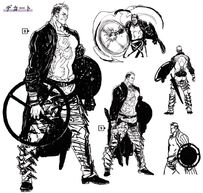 Concept art of Decadus
Add a photo to this gallery 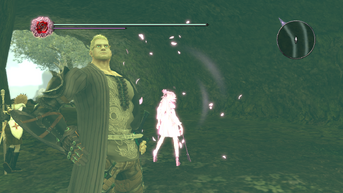 Retrieved from "https://drakengard.fandom.com/wiki/Decadus?oldid=18821"
Community content is available under CC-BY-SA unless otherwise noted.