Governess of the Land of Seas

Caerula is the Governess of the Land of Seas and also the leader of the three rulers: Bass, Gray, and Shaxor.

She is skilled with a whip and her magical ability is profound. She keeps her beautiful looks through a savage form of magic by stealing the youth of others. She was said to have been a very influential individual, amassing grand support from her citizens. She is said to have some sort of connection to Partition.

Caerula is mentioned briefly in Zero's Prologue by a soldier who makes light of her fury when comparing her to Zero. It can be presumed that Caerula sent her soldiers to go after Zero.

Drag-On Dragoon Utahime Five Caerula battled alongside the other lords against the Intoners in their quest for power. Caerula seemingly rescues Shaxor from certain death only to show him her true, elderly appearance just before she devours his life energy by consuming his heart. She briefly regains her youthful appearance before she is impaled to death. She and Partition may have been working together in order to find a way to break through the Mercurius Gate. Both of them have a sort of crystal ball that allows them great sight and knowledge about their surroundings.

One - Visitors Caerula is briefly mentioned, wherein One had observed that she managed to amass bountiful wardrobes and treasures in her domain. Much to Five's delight, she kept all of Caerula's possessions, although she later sold the dresses because she grew too big for them.

Caerula, Shaxor and Gray.
Add a photo to this gallery 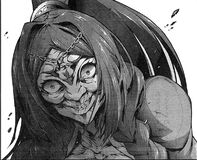 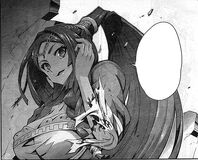 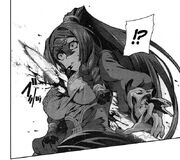 Caerula fatally wounded.
Add a photo to this gallery

Retrieved from "https://drakengard.fandom.com/wiki/Caerula?oldid=18827"
Community content is available under CC-BY-SA unless otherwise noted.