Lord of the Land of Sands

Bass is the Lord of the Land of Sands. He has a demented passion for creating dolls out of human flesh. Partition is his servant.

Although he wields no traditional weapon, he uses his magical power to manipulate a large golem to deal devastating blows to his enemies.

The Intoners invade Bass' castle and realize most, if not, all of his ornaments are made of human flesh.

Bass works intricately in a sequestered room, fiddling with the dissected body of a young human child. His servant, Partition, walks into the room and informs him that there are visitors in his castle who utilize a strange form of magic. Uninterested, Bass tells his servant to dispose of them using his man-made beast. Partition shows Bass who the invaders are, much to Bass' excitement as he notes that they're worthy of being in his collection due to being so cute.

As Bass watches the Intoners escape from his creatures, he goes on to mention how cute Three and Five are, ordering his servant to capture them. Partition tells him that it will be difficult to catch them alive, with Bass then insisting that he will be the one to do so.

Bass corners the Intoners with his golem and introduces himself, essentially commenting on how cute they all are. The Intoners try to use their individual powers on him but to no avail because he had already seen them use it and knows how to counter it. He tries to eliminate them with his golem's attack, the Bass Cannon, which is deflected by Four and instead hits a structure above them. As Four tries to regain her composure, the structure hurtles downwards towards her, Five and Three, leaving One to use her song and take immediate action.

Bass revels in the glory of his victory, having crushed a majority of the Intoners with his fallen structure. As Two weeps for her sisters, One and the others reveal themselves to have survived the rubble, poised for a counter-offensive. One attacks Bass with a sword manifested from her song and aims for the device which supplies his golem with magic. After his golem collapses into rubble, One corners Bass into a wall, with the latter pleading for his life and mentioning how the kids he took were going to be good-for-nothings anyway. A merciless One grabs him by the head and tells him to stop wasting his breath as she throws his head against the wall with excessive force, essentially disintegrating his head. The power that One used on him was so strong that the walls behind Bass crumbled and fell on his decapitated body. 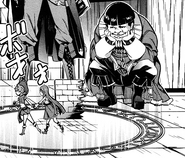 Bass watches as the Intoners explore his castle.

Bass on top of his golem.

A horrified Bass grabbed by One. 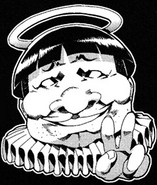 Dead Bass.
Add a photo to this gallery
Retrieved from "https://drakengard.fandom.com/wiki/Bass?oldid=18828"
Community content is available under CC-BY-SA unless otherwise noted.