Drakengard Wiki
Register
Don't have an account?
Sign In
Advertisement
in: Articles to be expanded, Characters, Females,
and 2 more
English

I don't see the point in answering.

If I have to pick, then my bag.

Accord is a character in Drakengard 3. She is an Android and serves as the narrator of the story. She is said to have come from the Old World to observe the events within the past.

Accord's origins and her creator are unknown. It is a mystery why she was created and also why she was sent on her mission to record the events of the "singularity" known as Zero.

A hologram of Accord appears before Baltas while he is leading the Lords of the Land of Midgard. When he gives the wrong password to open the Mercurius Gate, Accord states for him to "come again soon" before he is teleported away.

Zero recounts the story of her first meeting with Michael to three Accords.

Note: This branch ties into Shi ni Itaru Aka.
Accord observes Zero's actions until the latter is killed by One's Brother.

At the beginning of Branch B, she examines the many timelines and explains that a singularity (Zero) is what causes the timelines to split. Her goal seems to be finding the best timeline for Zero to fulfill her mission, although she suggests that she is from the "Old World" and that her goal is to record all the past and future timelines.

Accord meets up with Zero in her cottage at the Land of Seas to warn her that the branch she ends up choosing will be disastrous, regardless of her choice. Zero asks her how she can see the future, with Accord teasing her by mentioning that she can't tell Zero about that. Zero then comes to the conclusion that Accord can't see the future because she's manipulating it. Accord laughs off Zero's theory, simply stating that she's "not that talented." Zero strikes Accord from behind with her sword, only for the latter to deflect it with her briefcase and promptly take her leave.

Accord observes Zero entering into a pact with Mikhail to save his life. She then erroneously calls this the creation of the concept, apparently unaware of the pact made between One and Gabriella years before.

She suddenly appears to assist Zero in eliminating One. She intervenes by tackling One to the ground and disabling her barrier via phone call. Zero stabs through Accord to kill One, seriously damaging the Android while simultaneously achieving her goal. Following the completion of her mission, Accord is killed by Zero as an act of mercy and the parasitic flower blooms.

After Mikhail destroys the parasitic flower's final manifestation, a kneeling and headless Accord is left behind. Suddenly, another Accord appears before the decimated body as other Accords rise out of the rubble. She applauds the headless Accord for her actions and divvies up the other Accords to record the varying differences within the newly established timeline caused by the singularity known as Zero. They salute the headless Accord prior to dispersing, while another Accord thanks the Player for playing the game before she shuts off the television. She believes that she will one day meet Zero again.
Note: This branch ties into the events of Drakengard.

Note: These events follow Branch A of Drakengard 3.
An Accord continues to record the events of Branch A. She observes One's activities across Midgard until his apparent death at the hands of Nero. With no further information to gather, she ends the observation of the Branch.

Accord is briefly mentioned by the Resistance Weapon Trader as the proprietor of the business.

Accord appears in an alternative universe based on the events of the game.

According to her job story, an Accord android was observing a supernatural occurrence that emerged during the timeline, which is dubbed in their records as "B". Despite her efforts to keep her distance, she is dragged within the phenomena and enters the Library, the main setting in SINoALICE's continuity. She is the playable Accord who continues recording Zero and Mikhail's activities.

At the end of the event, Accord reports that the Library is a time distortion controlled by Gishin and Anki (SINoALICE's navigation characters) sometime after "the cataclysm" (after the Flower blooms). She confirms that Zero and the other Intoners have somehow revived themselves within the Library yet is unsure how it will reflect on the other worlds. She asserts that Gishin and Anki have "involvement with B" and suggests strengthening their observation of them.

The DOD3 weapon stories have Accord appraising each weapon for its particular rarity. Zero/Breaker's Job Story is Accord summarizing Zero's motivations from DOD3. Her Job Story notes that another Accord android is still observing "B" outside of its influences and hasn't restored contact with the playable Accord; it's unclear if the playable Accord ever reunites with the others.
Spoilers end here.

She acts enigmatic around Zero, knowing full well the Intoner's role as an anomaly in the differing timelines. She is also quite cheeky as seen when she prevents Zero from obtaining her book and gropes Zero's breasts. She is very concise with the events in the timelines, taking detailed notice of the various happenings affecting several branches and their routes.

Other than having access to multiple timelines, Accord is capable of using a special phone to call interventions into the timeline. 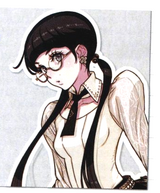 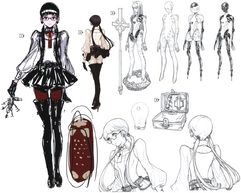 Concept art of Accord.

Accord in Route A.

Accord in Route D. 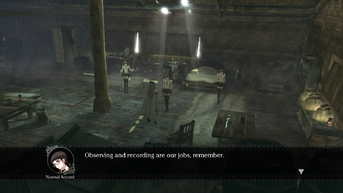 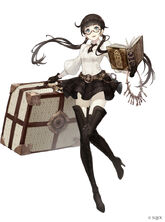 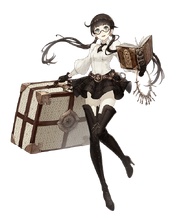 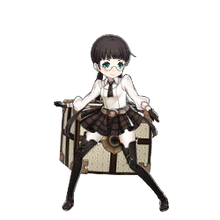